On my late 2015 model iMac I still run BigSur 11.3. The iMac should be compatible with OS Monterey and I would like to give it a try to use the old one as a second screen. For that, it should run Monterey. System preferences read "1 update" indicated with the little red 1. So it must be out there.

When I choose Software Update, the system starts looking for the relevant update and returns "checking for updates" and a spinning wheel. After that, nothing happens.

I've tried a few reboots, however, still nothing happens. I don't use fancy software that could block the procedure. In the App Store macOS Monterey can be found, so I tried the option 'Get' there.

Pressing the yellow button also yields the Software Update pane. This time with a reassuring "Finding Update" message. However, again, nothing appears, the finding process stays in a loop. So bad luck.

What's the problem and what's next? I've got over 150 GB of free space, so insufficient space cannot be the problem. Somehow the update routine doesn't seem to be able to determine what version should be installed. I tried the terminal-command <softwareupdate --list-full-installers> to see where I stand. Unfortunately I got the same inconclusive status, no results are shown:

As a next step I tried a safe boot to eliminate unforeseen software interference. Unfortunately, the same issue there and no luck. So, I ran out of ideas. Taking a shower is usually the moment for hunches to pop up. Suddenly I remembered that at first installation of the iMac I created an extra Administrator account to be on the safe side when something unforeseen happened. Maybe this would provide a way out ...
Guess what? System preferences yielded the desired OS update directly. Moments later I could start the installation! Phew. 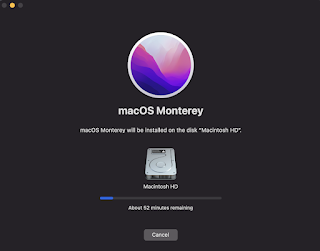